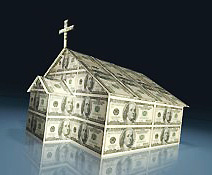 A lot of the biggest public arguments against religious institutions come back to money. The public sees mega churches and celebrity preachers living the lifestyles of the wealthy and reasonably questions their integrity. “How can they claim to love their fellow man while they’re taking money from poor old ladies?” “Who are they really helping anyway, besides themselves?” “Churches should have to pay taxes like the rest of us!”

I have a huge problem with the way many religious institutions and/or leaders deal with finances. There’s no question misuse, abuse and outright corruption exists within the church. I’ve been told by a few people that they like my posts, but think I’m “very diplomatic” or “easy on the church.” Diplomacy isn’t something I have been commonly known for, so I put a lot of thought into why my thoughts and views on the church and faith would be seen in that light, if only by some. “For the love of money is a root of all kinds of evils.” This verse from the New Testament seemed as good as any to put a focus on my introspection.

“Money is the root of all evil.” It’s not. It never was. It’s a common misquote which completely removes the sinner from the sin. Money is simply a representation of potential purchase power. A short cut for trade so we don’t have to directly exchange  our particular skills or wares to those who produce the plethora of things we need, but can’t or don’t do for ourselves. Bills and coins themselves are good for next to nothing beyond what we agree upon. Otherwise, coins make good toys for kids to retrieve from the bottom of a pool, or a crappy screwdriver. Bills, I don’t know, kindling or overproduced art? Money isn’t the problem.

I live in the country outside Charleston, South Carolina. It’s nickname is “The Holy City” largely because of the large number of churches in the area that dominate the skyline. Charleston has been a key location in American history and has recently shown it’s holiness in being one of the few places not to be thrown into turmoil by a true hate filled attack, while tensions were boiling over across the country based on what were in my opinion, lesser events. Two men in Florida had physical fight that resulted in one shooting the other, another man in Missouri was shot while running at a police officer in a menacing posture. While in the thick of the upheaval, in Charleston, a prejudiced young man walked into a church and after praying with the small group meeting there, shot and killed everyone he could. Within the same news cycle, a white police officer in North Charleston was on video shooting an unarmed black man as he was running away. Rather than tearing itself apart, Charleston came together. It has become one of the most popular tourist destinations in the world, and has T.V. shows based around it’s gentile social elite.

The town between me and Charleston is Mt. Pleasant. Just across the river from Charleston, it’s nicknames are much less flattering. Mt. Plastic and Mt. Please-Me are used very commonly to refer to the once small fishing village turned yuppie Mecca. Porsche’s, Mercedes, Lexus and BMWs outnumber Chevys, Fords and Dodges. Nannies and maid services, yoga pants and breast implants mark the leisure set of non-working, college educated moms. Kids wear bow ties and have monogrammed backpacks. People there introducing themselves include their subdivision or neighborhoods as a way of establishing their status. If you don’t say, they will ask, it really seems important to them. Always an anomaly, when asked I say I live in the country, you can see their wheels start spinning as they try to decide if its a trailer on a postage stamp or a country estate.

Charleston is not made up of only good, fair minded people. It’s well known for political corruption and is a grand display of the haves and have-nots. Mt. Pleasant has a reasonable percentage of regular, working class people. Some of the wealthiest people are also the nicest most down to earth folks you could ever hope to meet. Charleston, a party town with tons of bars, lots of cocaine, an old money guard and plenty of slums, presents itself as and produces the fruit of its nickname. Mt. Pleasant with a solid real estate and service based economy full of quaint shops and restaurants, presents itself as and produces the fruit of it’s nicknames. In either case, views and opinions are biased based on each person’s perspective. Again, the total is greater than the sum of the parts.

Churches and have been in and out of favor by different people in different places throughout history. Seen by some as holy and righteous, by others self-serving and fake. Sometimes for a lack of perception and genuine understanding, other times for good reason and sound judgement. Just like these municipalities, the church is made up of many individuals, some fitting the general outside perceptions, others not at all. My personal beliefs about what the church is and should be, has been countered by my actual experience. I see the church as a family, the bride of Christ, many different personalities joined together by faith and forgiveness, nurturing, accepting and loving. My experience with churches has been that of indulgence, exclusion, judgement and condescension more often than not. For years I was in the “churches are just a bunch of greedy hypocrites” camp because of it. But all the while, I knew good people who went to church, the best, happiest, kindest people I knew went to church.

The same as any person who chooses to can move to Charleston or Mt. Pleasant, any person who chooses to can show up at church. Jesus was clear in stating that not all who claim to be members of the body actually are. There are real and fake Christians. “Not everyone who says to me,’Lord, Lord,’ will enter the kingdom of heaven. On that day many will say to me,’Lord, Lord, did we not prophecy in your name, and cast out demons in your name, and do many mighty works in your name?’ And then I will declare to them, ‘I never knew you; depart from me, you workers of lawlessness.’” Christ was clear that there would be false Christians, not just among congregations but false teachers and prophets. That means seminary professors, preachers, worship leaders, Christian writers, individuals and potentially whole congregations that the entire church gets judged by, aren’t Christians at all.

When it comes to churches and money, one thing is certain, there are more poor struggling congregations and preachers than there are wealthy ones. The ones that are best known and talked about in the secular world are a tiny fraction of what is the church, which most certainly does not mean wealthy churches aren’t Christian. It doesn’t mean well known preachers are false teachers. It doesn’t mean the wealthiest, or most disgraced church leaders aren’t Christians. It does make it likely that some of them are. On the other hand, not all down home, traditional bake sale to replace the hymnals churches and their members are or aren’t Christians either. People tend to form opinions on either the best examples and the worst, generally choosing and using them to reinforce their own preset views. For example; The guy on TV, busted for a sex ring proves the church is all hypocritical, the guy who feeds the homeless once a week handing out bible verses, even though he has next to nothing is clearly nuts. Or, The Lord is using this good Christian’s sin to show us we’re all flawed, or “God has chosen to bless him exceedingly” about the guy who’s employees live in poverty. People can talk themselves into anything. There are rich and poor people in everything, lazy useless degenerates that are rich and poor, hard working, good hearted people that are rich and poor, ruthless schemers who are rich and poor, and Christians who are rich and poor.

“Churches should pay taxes like everyone else!” Churches certainly enjoy the most tax exemptions, but not much more than many other not-for-profit or non-profit organizations, and no more than other religious organizations. The big difference is no property tax, and less oversight. I can’t say I agree with all the tax exemptions different organizations get, but I don’t agree with many of the taxes everyone else has to pay either. The separation of church and state was and is the primary reason for their exclusion and for those who believe churches should pay should consider the implications. Church organizations are not allowed to send lobbyists to influence government regulations, if they were taxed the same, they could and would.

Jesus sent the disciples out with nothing but the word. He told the rich young man to give away all he had. He didn’t say live in poverty or take no payment for doing good service.  To me this shows you must love the lord, not worldly riches, and that loving the lord isn’t a way to financial success. People point fingers about churches wanting ten percent of their income, but the Bible actually calls for ten percent of ALL that you have. That’s not greed, it’s biblical statute watered down. We’re promised peace of mind and eternal life, not earthly trappings or an easy life.

When commenting on the church, I base it on the church as it is at it’s heart, that which it was intended to be, and is for so many. There are plenty of critics who focus only on the bad examples. I’m a Christian, Jesus lit a light in me that isn’t disturbed by the winds of change, not filtered by political correctness and not overpowered or dimmed by the world around me.